Remember when Reader’s Digest was good, and even though it looked like it had the most [germs, bacteria, baby feces, urine sample splashes] on its ratty pages, you wanted to read it? When it was filled with anecdotes, recipes, inspirational sayings, and wise words? I thought the same could apply to India, and perhaps even help you in your future travels here. That being said, here’s some good readin’ for you whether you’re at work, taking a nap, or on the can.

#Fact# – – If you see what looks like a headless child hanging from the roof of every home, don’t fret; it’s just a headless grey doll meant to bring good luck.

*Tip* – To avoid stepping on poop, don’t go outside in India. Or inside.

~Inspirational Quote~ – “You are fat. F-A-T. Fat.” –a student’s uncle while talking to me and a friend. So sweet.

*Tip* – To boost low company morale, create fun, team-building activities such as staff vs. student cricket matches during the last hour of work one day a month, then cancel at the last moment and never reschedule.

Grind the first 4 ingredients until a nearly smooth consistency is formed (but not soup). Add tomatoes and grind just a bit more. Heat some oil in a pot over medium heat, and once sizzling, add paste. Stir constantly and cook at least 10 minutes, or until the mixture has become less watery and has acquired a golden-brown hue. Set aside. In another pot, hard boil the four eggs. When rice or naan is nearly ready, re-heat paste mixture and add a cup of water, incorporating by stirring. Boil for another 10 minutes until the desired thickness has been acquired. Peel hardboiled eggs and cut each lengthwise in half. If serving with rice, make the curry a bit more on the watery or “gravy” side; if serving with naan, cook longer to achieve a thicker curry. Serve with carrots and cucumbers chopped freshly on your floor. Sprinkle with hairs, crumbs, or bug parts as desired. Serve hot.

*Tip*  – Always be on your best behavior when visiting other countries, because like it or not, you’re representing your nation. Things not going so well? Simply say you’re from a country that, due to a limited education in geography, they’ve never heard of, such as Croatia or Lithuania. Works like a šarm.

*Tip* – If you’re the government and are building potentially dangerous roads high on steep mountain cliffs, build a guardrail. Start by planting sturdy 3-foot-tall posts in the ground, spacing them out every 10 feet.

*Tip* – To economically and effortlessly dispose of your old newspapers, magazines, and schoolbooks, simply gather them into a sack and throw, one or two at a time, into your nearest pond/lake/river.

<Short Story> – A friend and I went out for lunch, ordering both a Davangere Open-Faced Dosa (South Indian) and naan and a Punjabi gobi gravy dish (North Indian). We were in a rush, so when they asked which to bring first, we just asked them to bring both at the same time. The manager actually recoiled in horror and shouted. “SOUTH AND NORTH INDIAN AT THE SAME TIME? NOOOOOOO!” We decided to have the dosa as our starter rather than risk our livelihoods.

*Tip* – Entertain your kids during long car or train rides by playing the famous “I saw a…” travel game. If in India, here’s a sample list of sight-seeing travel goals you might see on your trip through this splendid country:

*Tip* – Rotate your watch from your right hand to your left every few days in order to sunburn evenly.

#Fact# – If you are a couple of grown men, teenage girls, girl-boy cousins, or anything EXCEPT a couple showing affection, you may hold hands in India.

<Short Story> – While I was in Bangalore, India’s 3rd-largest city, I met up and stayed with a bunch of people all around my age. In a variety of settings—a home, a bar, an apartment, a restaurant, a sidewalk—my looks were talked about nonstop. Not my facial characteristics or manicured toenails, mind you, but my weight. What they said was so uplifting that I thought I’d compile a list for you to read in case you come to this part of the world. This small list was compiled in just a few hours, too.

~Non-Inspirational Quote~ – “She eats a lot; that’s why she’s so huge.”

~Definitely Not An Inspirational Quote~ – “What are you taking, weight reduction tablets?”

~This Never Could Have Been An Inspirational Quote~ – “You fit into all my shirts, nah? But that means I am also fat.”

Looking at the foreigner 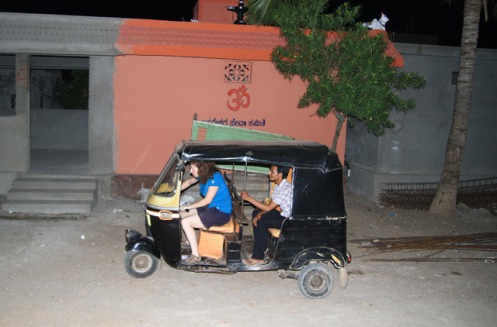 An update and photos on Nepal will be up soon, but right now, I have to prepare to leave Hubli for good. You’ll hear from me soon, though!

5 thoughts on “In India, Anything Goes – Update Part 8”