India is a confusing place. As you can see from the billboard above, well, people just have a different interpretation of what normal life really is. I spotted this ad for the SPCA and just had to snap a photo.

Yes, things are different here.  So many things are confusing, and the contradictions are endless.

Let’s take equality, which is really a joke here. India tries hard to be all about empowering people and creating equality, but at the same time, there are massive rules (especially for women) that go very much against the idea of independence or freedom. Women shouldn’t be out at night. Women aren’t allowed in bars. Men can dress like slobs but oh no, women must be nicely groomed and expensively dressed. Youngsters, even up through the age of 30 or more, still live with their families and must inform their fathers whenever they intend to leave the house or are stuck out later than expected. Just the other day I saw this billboard, which reminded me of the strict curfews. 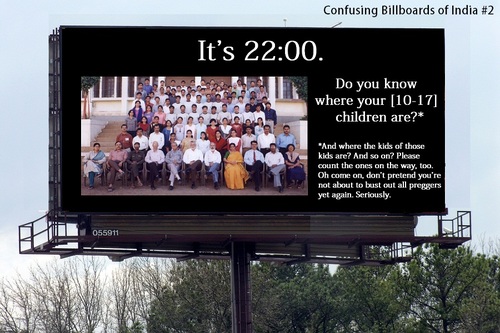 Names are hard to remember here, and when you have 40 coworkers and over 50 students, it can be a challenge. Given that in America we have names such as Gary, Mary, Larry, and Kerry, I know I shouldn’t be annoyed with the similarity in names here, but I am. There’s Geeta. Neeta. Kavita. Holy Sheeta. How am I to remember?

Here’s another random ad I saw. It’s weird and confusing, that much is for sure. Not sure how this service would do in the U.S., but it certainly takes the worry out of life, right?

Smelly people. Now there’s a great source of puzzlement in this country! Why is it that people here will spend more time bathing their water buffalo (as in, they’ll wash them by hand and kindly massage them) than themselves? Even people in my office smell TERRIBLE. And that’s coming from me. Me. Showering out of a bucket may be harder and more time-consuming then a traditional spray shower, but that doesn’t mean you’re allowed to smell bad all the time! Sure, we all walk through puddles of garbage, dirt, toxic smoke, and other small human and animal hazards to get to work each day, but that doesn’t mean I should shudder when you sit down two feet away to show me your powerpoint presentation for review.

Speaking of smells, well, I thought it would only be proper of me to write about the garbage without investigating all the facts. So I saw this billboard for what I thought was an American company, but I guess now they’ve come to India? Not sure about this one…I don’t know if I like the tone. Can’t tell if they’re playing with my head or what!

Speaking of work, well, that’s a fun one. There are no street signs here, so one has to rely on landmarks and visuals to get anywhere. I, for example, remember that to get to work, I walk 300 paces once I see the first cow, then turn left at burning garbage pile #4. If I reach the panther preserve, I’ve gone too far.  No really, it only takes 15-20 minutes to walk from my apartment. Once on my street, one literally goes right, left, right, left, right, left, right, left, right. Lysdexics should allot more time for navigational errors.

Even looking out my window at any given time of day offers just a hint to the mess of a world out on the “quiet” suburban street below. I’ll go look out now to give you an accurate account of what’s before my eyes at this moment. Ah, here…a coconut tree, colorful houses, chalk drawings on each dirt doorstep, stray dogs, a dirt street, a temple, garbage, some kids playing, women re-sweeping dirt, and a urinating gent.

Oh, I knew I had one more photo to share. After all, one has to keep hands clean in order to stay healthy in India! Strangely, I’ve been here a month and a half and have felt sick at least 5 times. I don’t know what I’m doing wrong. Anyway.

Okay folks, that’s all I have for right now. I’m still so confused, but let me know if you have any answers. I’ll be working on hunting down the truth and trying to figure out what this place is all about. Perhaps I’ll share a creepy stalker story next time, or maybe I’ll actually tell you what work I’m doing here! Don’t I always promise that? Yeah, don’t count on me telling you or even figuring it out for myself. There’s much time left here though, folks, so together we’ll figure out what makes India tick.

Until next time, over and out!

4 thoughts on “In India, Anything Goes: Update Part 3 – Confusion.”