India is a country of amazing contrasts. And when I say amazing, I mean that the contrasts are staggering, but not necessarily in a good way. There’s technology right next to poverty, cow carts next to huge jeeps, and beggars next to businessmen. Despite this fact, I often forget I’m even in India. Part if this is probably due to the fact that I adjust quickly to any living situation, and part of this is because I’m spending most of my days working in an office, Western style. I live in an apartment (albeit with differences, but still a place where I feel at home) and work in a fairly normal office on my own computer.  It’s often only when I walk to and from work that I remember I’m in India. Here’s a photo of several Deshpande Foundation employees in our office (post conference):

Pretty normal, right? Chairs, computers, friends. So aside from the fact that upper management is the worst I’ve ever seen, staff lunches are all fried in massive quantities of oil, and neighbors occasionally hold funerals and burn bodies out in the field behind our building, it’s a pretty normal work environment. It’s only during the walk to and from work that I really know I’m in India. Even though I walk on the same exact roads 2-6 times a day, the stares never, ever stop. And I live in the suburbs, so you can imagine that when I get to the main road I have to cross to get to the college, the buses full of people, tons of moto drivers, and various cows just want to stop and gawk. Get over it, people. Females of other colors and even white males don’t have nearly  the same problem with the staring, and I’d say I can get over it, but it’s an everyday challenge. Aside from the stares, sure there are cows, but those aren’t a big deal. There’s a huge mix of teens in jeans, college students listening to music, ladies in saris, kids in school uniforms, poor students walking barefoot, businessmen, women carrying baskets on their heads, and more. There are crazy homes built with outdoor staircases and rooftop terraces. There are rubbish fires. There is garbage. Still, it’s just 15 minutes of India before returning to relative comfort.  A 15-minute walk just 90 degrees in a different direction, though, brings about an entirely different picture. All of a sudden the city ends, the bustle of traffic disappears, and you’re surrounded by farmland. The air smells fresh, you’re walking on a dirt road, and children are staring like they’ve never seen a white person before. Sturdy cement houses in many colors turn to clay and tin homes that look ready to crack. Water buffalo bathe in a nearby lake. Further on down a few more curves in the road, a young boy shepherd watches his goats. Sugarcane grows in a field next to you. Men in a tree climb down and start collecting the tamarind pods they’ve just picked. Kids who have followed you ask for their picture to be taken. Boys play cricket in a field next door while other youngsters help collect cow dung for fuel. Families of pigs walk by. People crowd around your camera to see their photos. Women sort through piles of red chile peppers drying in the sun. Girls are tattooed on their faces at birth. This is when you realize you’re in India.

Walks with friends in rural villages are definitely the best part of being here. But whether in the rural areas or in the city, there are still many reminders throughout the day (especially Sundays, my one day off, during which I try to travel) that give clues about the fact that I’m in India.                You know you’re in India when… …whether there are squat toilets or western toilets, the company that makes them is called “Hindware.” Crikes. …people get up at 5, 5:30, or 6AM to sweep. By 9AM, different people are sweeping in front of their homes or businesses. The problem is that they’re re-sweeping dirt, and since most roads are mostly dirt, and trash has no home but the road, nobody ever gets very far. It seems just slightly useless, and it makes me sad to see such a useless chore being performed again and again. …your day is completely made because there’s toilet paper in the bathroom. …you never watch tv with the exception of one time at a friend’s house, and that time you watched was on an ’91 Gateway desktop computer. Okay, I don’t know the date exactly, but it couldn’t have been any newer. …you’re chosen to teach a section of the underprivileged program’s male grooming class because you’re the only one here who knows…how to tie a tie. …boys are good at doing cartwheels but girls aren’t. Well, they might be good at them but we’ll never know. Girls are not allowed to do them for the most part since it’s considered improper for a female to do such a physical movement. …you see things you’ll never understand, such as an Asian Muslim holding hands with a Muslim lady in a culture where you’re not allowed to hold hands. …you’re thankful that you got somewhere alive. There may be laws against talking on your cell and driving in the States, but try it here, where a friend of mine was (literally) texting in Hindi on one phone, talking in English on another, and swerving around cows, water buffalo, and camels while driving us up a mountain. I’m not even kidding. …you have tea in a kitchen with a cow. …you have a whole school out on break collectively turn their heads to stare as you walk by …every guest speaker’s powerpoints fail repeatedly, sound systems never work, 9 different microphones are brought out during a conference only to keep failing, and the audience is groaning in displeasure. …you see the worst magic show of your life, or really a collection of sad “tricks” put on by a man in a sparkly red shirt and a disgruntled, even more talentless wife. Said tricks may involve said previous sound system not working and an attempted dance where an American flag is pulled out and waved in your direction. …every single sunset is amazing. Even though you know you’re ruining your eyes, you can’t stop staring at the huge pink orb. …everyone’s eyes widen in terror as they see you drinking ice water, which causes illness. Same thing with eating fish and dairy together…it’ll cause your skin to turn white.    Yes, all of these things are true. I could go on and on, but you have a life, right? It’s back to work for me here in an increasingly hot India. In the meantime, here are a few more photos for your viewing pleasure. 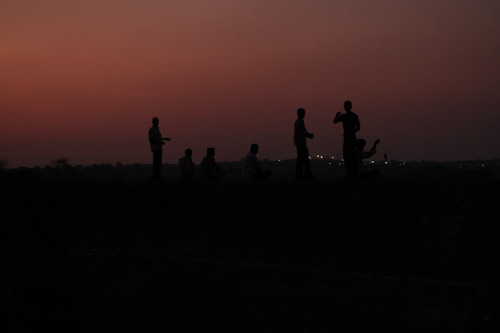 I’ll try to keep sane and not mind the stares, and y’all keep on trucking.

On a rare day off, students invited me to take the train…and auto-rickshaw…and then bus…to visit their families in their native villages. A cow lived in one family’s kitchen, I visited a 12th century temple, and while in a local priest’s home, I learned to play the tabla. It was all amazing. 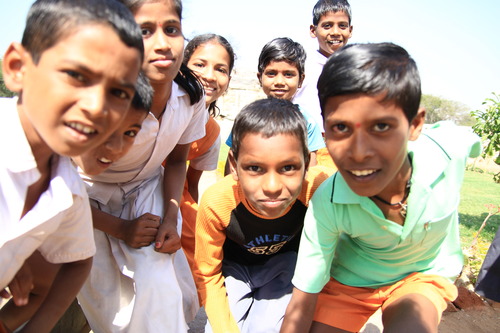 Here are a few of my favorites from the day.