Disclaimer: I did something the Italy Anti-Tourist would be ashamed of: I visited several popular European spots. Well go on, read on–I had a good excuse!

On my way out of Malta, I had planned on stopping by to visit my friend Nicola in his native Italy. Why go back to New York straight away, I thought, if I could avoid the awful pre-Christmas atmosphere a little longer and get to see my old college friend–in Italy?

So off to Pisa I went after saying a sad goodbye to all my wonderful friends in Malta. The flight was beautiful. Not surprisingly, I’d gotten to know Malta quite well and could identify all the grottos, churches, and gorgeous spots the plane flew over before we got too high to recognize the creepy men anymore. Once in Italy, I caught a train to La Spezia and we had our reunion over some proper pizza (pictured below). Sorry, Malta, but you guys just don’t have a clue considering how close you are to this place.

We then took a late-night train to the Cinque Terre–specifically, Manarola. The oldest town of the Cinque Terre, it’s probably the most photographed as well, so to visit my friend’s home (it’s visible in my photo up top, in fact!), known the world over and even pictured on a puzzle I have back in the U.S., was terrific. Sure it wasn’t tourist season, but has that ever been a bad thing? Turns out the weather hated me, but that’s beside the point.

I woke up the next morning in his centuries-old, oh-so-quaint home overlooking the sea. We went on a “jaunt” that was crazy beautiful, then got tea and chocolate croissants in the local shop. It was time for a hike to Corniglia, the town due north. We hiked…and hiked…and after sweating a few buckets despite the cold, we were soon awfully high up. What an incredible view! We could even see the snowy peaks of the Alps. After descending from the mountains following our 3-hour hike, we got hot chocolate and took the train back to his home. I was starving. Big surprise.

All was well and good until the next day, when the rain started. And the next day, when I couldn’t meet Nicola, who was taking classes in Genoa. Snow had brought everything to a halt. And the next day, when we couldn’t get to Lucca due to more rain and flooding due to snow melt. And then the news that the rail workers were going on strike on Sunday. The day of my flight. Could I leave today, then? No, because Nicky’s family doesn’t own a car, and the trains weren’t working due to the floods. We were stuck, and I was actually afraid I was going to miss my flight. I tried to stay calm as we walked back, feeling more than a bit dejected.

After many calls and arrangements, we made several plans and decided to wake up quite early, as missing the flight was not an option. I’d been catching up on work inside my friend’s home and chatting with him for days, so once the rain stopped (15 hours before I had to leave), we took some walks around in the evening, made soup, and ate pesto pizzas and foccacia that still barely quenched my post-Malta appetite. Don’t believe the “Italians keep eating for hours” hype. I’ve never found it to be true.

We woke up early, waited several hours when the first train was canceled for no apparent reason, then actually made it to La Spezia, where we sadly parted ways. Despite the weather, I was happy I stopped over in Italy; after all, I was going to visit my friend, not see tourist sites. And we did get some amazing hiking done! I had a few hours to spend in Pisa before my flight, so I walked through a marathon and did perhaps the most touristy thing of my life: Got a photo taken NOT LEANING on the tower of Pisa. It was a beautiful day, and the buildings surrounding the tower were equally lovely. On my way to my flight I made three stops: Pizza, pastries, and gelato. It wasn’t yet noon, but the look on my face as I ate my half cream biscuit, half amaretto cherry (the scooper picked it) cone must have been pretty blissful, because two bikers yelled to me as they whizzed by and then nearly crashed. Awesome. I ate it all while waiting for a train to not cancel on me due to overfatness. I got to the airport, boarded, and flew back to NYC.

Below, photos from Manarola, La Spezia, and surrounding hilltops. 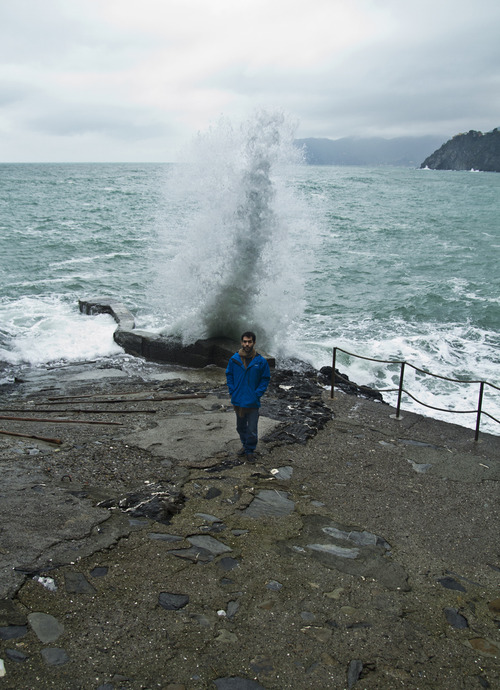 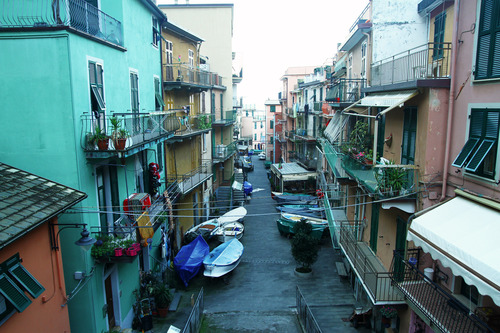