It’s been a while since I wrote about how easy it is to travel abroad when given modern interpretations of signs, expressions, people, and the like. And given that most of my travel in 2016 was to Spanish-speaking countries—and no, I still don’t speak Spanish—you can imagine I had a very easy time getting around. How? It’s due to expressions and signs like these that made my life easier.

If you’re planning on going, or just want to catch up on the local lingo, here’s how to travel in Nicaragua:

“Express bus” [city edition] – A bus that can drive faster than you can walk, if your walking speed is measured in feet per hour, and that number does not exceed 500.

“Fan” – It is literally cooler to stand outside.

“Clean” – See that moving thing in the darkest corner of the bathroom closet? That’s no mop. That’s a mama cat and her 5 kittens you just discovered! 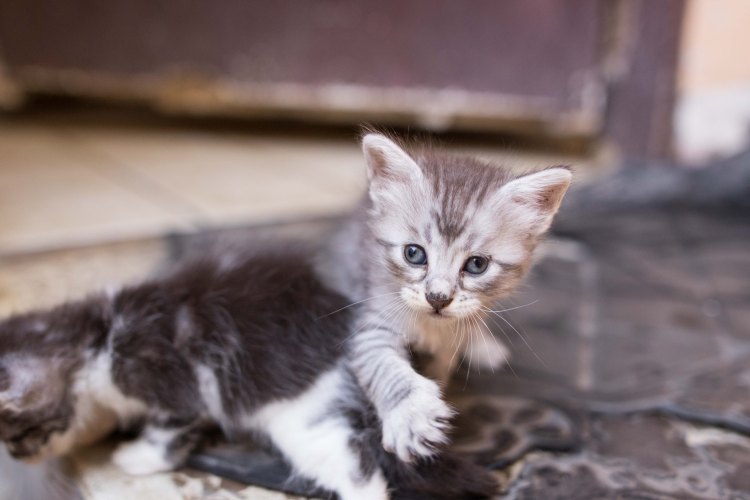 “Shared bathroom” – A bathroom that’s empty with the exception of 5:30 AM to 8:30 AM, when the sounds of the housekeeper splashing water and buckets around, the parrot squawking, the kittens mewing, and the whole family basically starting to party is only outweighed by the how-many-times-can-one-gag-per-minute-oh-that-many man.

“Wifi” – How can the connection be this good in such a seedy place? Literally, it is better than I get in ‘Murica, and I can’t even make a joke about it disconnecting. I’m pretty sure certain jail cells are nicer than the room I’m in in this seedy part of Managua, but this wifi is spectacular.

“Hop-on, hop-off bus” – There’s no need to even use leg muscles to hop if you go around a good turn.

“Volcano” – I seem to have been in many volcano-infested lands lately (Indonesia, Chile, Hawaii, Mexico), but here in Nicaragua you can literally drive your car to the top of one, walk 10 feet, and stare right down into a gaping hole of spewing orange lava and sulphuric smoke. What an awesome liability waiting to happen! [Taken on my cell phone just to show how close you can get] 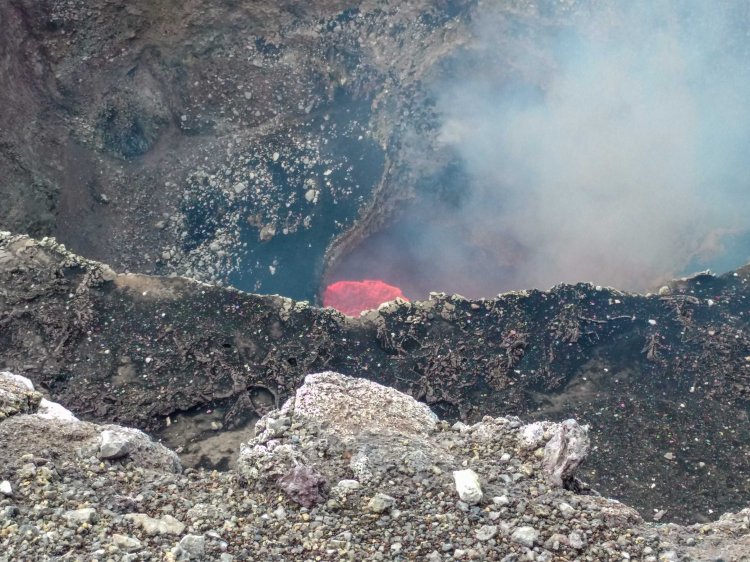 “Non-exclusive bus/taxi” – I hope you love butts and body odor.

“Did you hear the monkeys howling?” – No, because at 4:45 AM every morning, of COURSE I expect to hear a sound that can only be described as a dinosaur roar, dog bark, and woman being murdered scream all rolled into one, right outside my door! Completely not jarring. Oh, it’s kind of close.

“Express bus” [countryside edition] – Driving in the other lane, i.e. the lane with oncoming traffic, until said oncoming traffic is seen approaching and is within 50 feet. Hello again, India!

“Luggage” – This woman’s live chicken, which she carried next to me, squawking, in her hand throughout boarding the ferry, the hour-long ferry trip, and then the 2.5-hour-long bus trip after that. 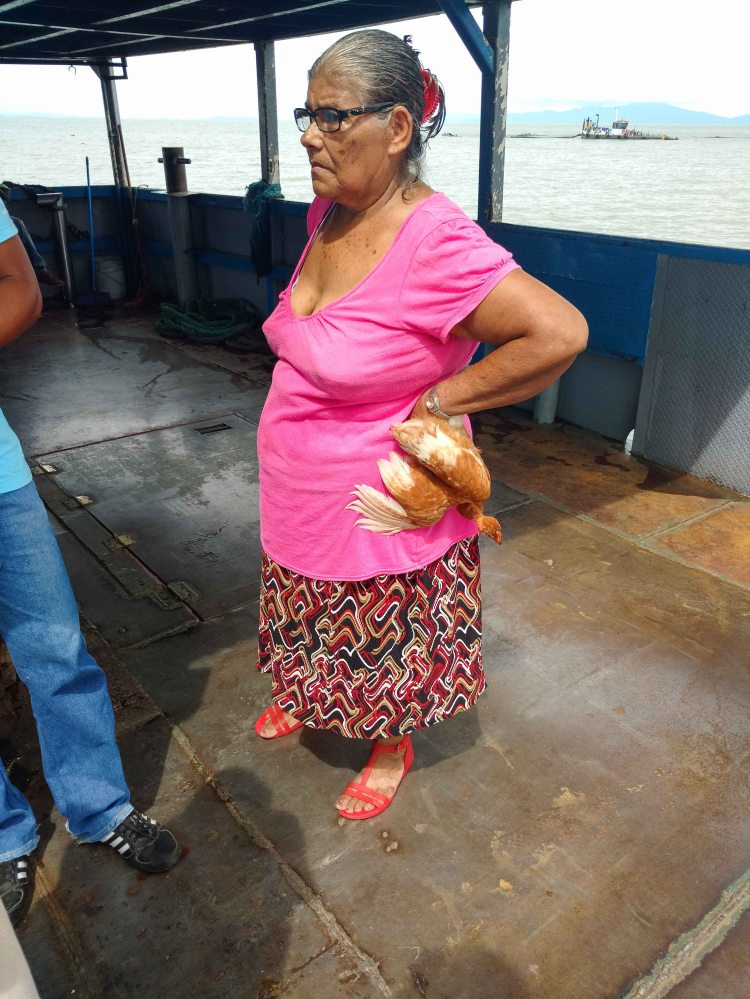 “Monkey who just ate something sour” – this (photo)

One day I’ll do a 2016 recap, but let’s be honest: That probably won’t happen until July. I’m hoping to travel soon, but until then, ta-ta!

Howdy folks! Once again, I have an entire post ready but no time to post it. But exciting news: I’m one of the two official photographers of this year’s Times Square New Year’s Eve Ball Drop! I’ll be running around all night, so look for me among the 1,000,000 people…and I’ll write soon. 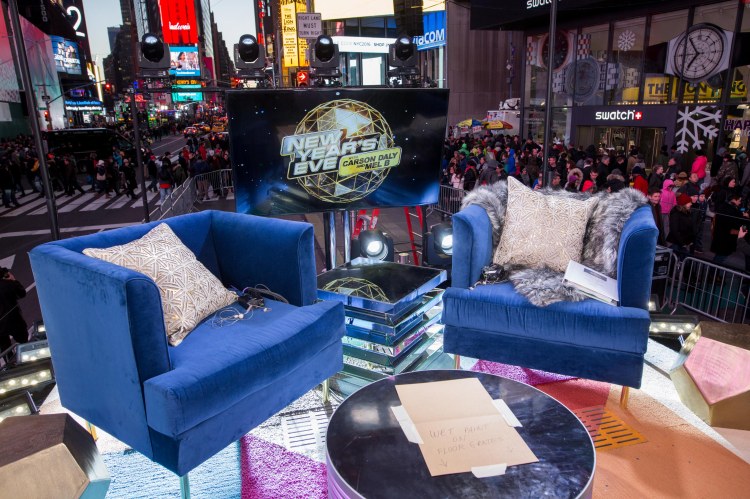 After nearly a month road tripping through Chile and Argentina, our video is finished! Dreamed up by Didier Van Bellinghen of Belgium, the film documents our adventures through Patagonia via our Wicked van rentals, Couchsurfing, and the 10 of us who met up for our epic adventure.

I shot b-roll and photos for the film, which was excellently edited by Didier (www.Picture-Perfect.be). And though it makes us look more on the serious side, rest assured that we were laughing, crocheting, hiking, poking fun at each other, overeating, cooking, sleeping in crazy locations, meeting strangers, camping beside glaciers, and more together over the weeks. We all became great friends, and I’m so proud of this little film!

Filmed February-March 2016 from Santiago, Chile to El Calafate, Argentina, down to Punta Arenas in Chile and everywhere in between!

Doors in America can be locked and unlocked from either side. This is handy in the case of locking someone inside, needing to get out in the case of a fire, or because having locks any other way simply wouldn’t make sense. Any other method of padlocking from one side, or locking and not being able to unlock even when inside, would not only be a safety hazard, it flat-out wouldn’t make sense.

In much of Peru, as well as in many other crazy countries, doors can only be locked from one side. This is precisely how I got locked in the place where I was petsitting while on my way to Machu Picchu.

I was actually locked in the yard and not the house, but climbing a tree, then a shed, and then a high stone wall with my camera gear seemed like a bad idea. I had to give my keys up since a local friend was picking up the owner of the house, and I was going to be off in Machu Picchu land by the time she got back. But it was a Sunday, and no one was supposed to be around to disrupt that not-so-simple door. But alas, the local farmer decided to uncharacteristically visit on a Sunday and accidentally lock me in. After about 4 hours of waiting, Skype calls, and efforts to plan a trip I had not planned on taking, I reached my friend Nancy and was rescued. It was an inauspicious start to my trip to Machu Picchu, but to be fair, I hadn’t planned any trip at all.

To say I don’t like tourist attractions, museums, and common sites is fairly obvious. But when you live an hour away from one of the most well-known sights in the world, and you have insider advice from locals, people–including locals–getting rather annoyed at you for not going, well, maybe you better just go. I had one day to make it happen, and that was Monday. I didn’t really feel I HAD to see Machu Picchu, and therefore hadn’t planned. I had no tickets for the train, bus, mountain, site, hostel, nuthin’.

At 4:30, Nancy and her friends felt so bad about me being locked in that they ended up driving me to Ollantaytambo, the starting town for all things ruins, for a nice dinner. There were no train tickets left, so I got one for early in the morning and got a hostel. At 4:30 the next morning, I woke up, walked to the train depot, met my Canadian seat mates, and sat back to enjoy the most expensive train ride of my life. It involved a dancing clown, a fashion show, Inka Cola, and beautiful views somewhat marred by the poorly designed neon lighting inside the train. I would have loved to hike in the jungle, but alas–there was simply no time, as my flight to Lima was the very next morning. I ran to get my bus ticket, and then my Machu Picchu + Machu Picchu Mountain hiking ticket, and then back to the bus to take an awesome sidewinding ride up to the site. It was time to start!

From one anti-tourist traveler to all other one reader seeing this post, I can definitely say that walking up and looking down on Machu Picchu was beautiful indeed. Unlike Madonna, in person it looked exactly how it does in every photo. There were clouds hovering across the way on Huayna Picchu (also called Wayna Picchu), very few people on the site itself, green everywhere, and threatening clouds surrounding this tiny ruined town on a mountain. But there was little time to spend there, as I’d gotten a ticket to hike Machu Pichu Mountain/Montana. While most people stay on the ground site, or do a trek up to the ground site, or hike Huayna Picchu (the peak in the clouds that’s the background of every Machu Picchu photo ever), my local friend Saito had recommended the lesser-known Machu Picchu mountain. It’s also twice as tall (starting from Machu Picchu) as Huayna Picchu. Here’s what the peak looked like after I’d already been hiking a while. 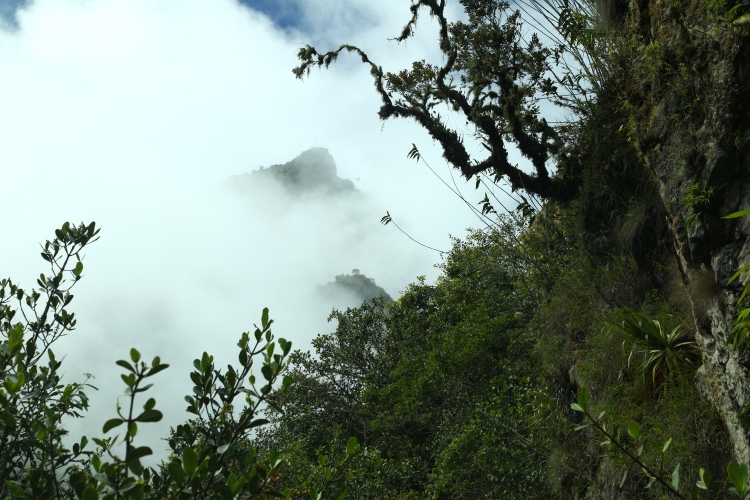 Hiking was beautiful but tough. Yes, the air is certainly thinner, and yes, there were a fair number of hikers. Most were from South America, several hadn’t brought water (I shared), and many thought I was crazy to be hiking “alone.” But I loved stopping when I wanted to take photos! We were all huffing and puffing, but the constantly evolving scenery was fascinating. It went through mountain moss fog zones, temperate rainforest, deciduous forest patches, greenery, spiderwebs, rocky bends, and more. Part of the hike had stone steps that, if you fell off (which I nearly did when I slipped in the rain while coming down the mountain), you just might die while falling down the whole mountain. It was awesome.

Eventually I made it to the top, and ate a few snacks while taking photos along with everyone else who was up there. The 360 views and feelings of superiority weren’t too shabby. 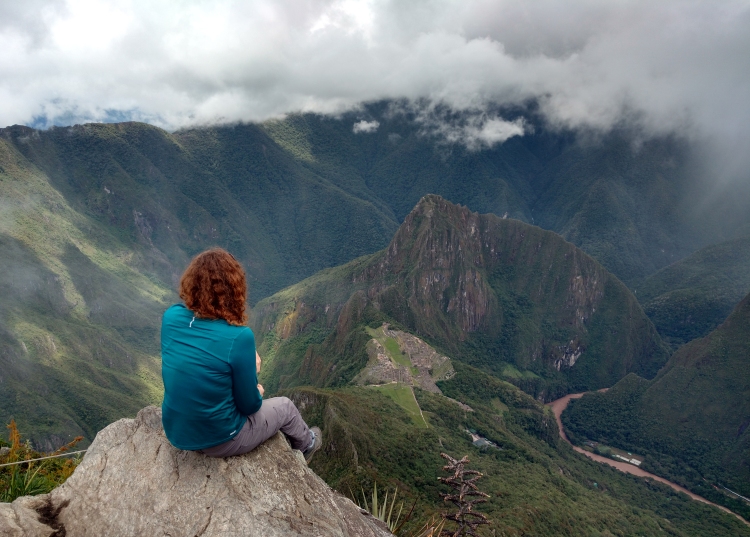 After coming down, I had a lot of time to explore the site. I actually wrapped around and walked through it nearly 3 times, especially because it started to drizzle and scared many people off. Water. Seriously, folks. I didn’t mind getting Machu Picchu shots with practically nobody in them. The mountains reminded me of China if I’d ever been to China, and the views, chinchillas, and steep drops were pretty awesome. It ended up being a perfect day. I even caught some obligatory selfies! I caught my bus, got a snack, hopped on my train, and took a 50-cent ride back to my town. A few hours of sleep, a ride to the airport where my money was used to bribe our way out of a police stop, a flight, a sketchy hotel, a 3-day bus trip, an illness, and a border crossing later, and I was in Chile. But that’s for next time. 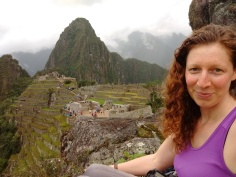