What are these random photos doing together, you’re wondering? Funny you should ask, because Explore the Elements is a contest being held by Thomas Cook–and if you look closely, you’ll see four elements loosely interpreted in all of my travel photos presented before the grand jury today. Hey, I could have used standard landscape photos to post about earth, fire, water, and air–but the judges specifically asked for unique interpretations. So here goes. Enjoy!

When I think of earth, I think of it not only as an element, but of our Earth as just a small speck in the grand scheme of the universe. Here is my photo from Joshua Tree National Park, in California–with a night shot of the here and now along with hundreds of stars. It’s that looking beyond in this very desert that has always made me feel very, very small.

While one would think everyone submitted fire photos, it turns out that not everyone has one–but everyone has a beautiful “fiery” orange sunset! In this shot of my photo of a Tibetan refugee in her one-room family home in Nepal, we realize just how important fire still is. The years of hard work etched on her face, the look in her eyes, the crouching position as she gets ready to grab the boiling water–it all revolves around fire and the concept of still doing everything by hand. While we have microwaves, ovens, toasters, waffle makers, George Foreman grills (does anyone still use those?), fire is the only method available to cook in these remote, electricity-less homes. Here she is boiling water to make yak butter tea. Yes, I sort of regret having tasted it. I originally shot this scene in black and white, because it helped my eye focus on the two most important aspects of the photo: Her and her fire.

I had so many lovely earth-meets-water-meets sky photos I wanted to post, but when I think of air, my mind goes to breathing, mountain bikers/snowboarders, and birds. Who hasn’t wanted to fly? Well, besides those who have a fear of flying, I mean. It’s incredible that only one type of animal on our entire planet has the ability to see from above, and personally, I wouldn’t mind being a bird for a day. While working on St. Thomas in the U.S. Virgin Islands, I photographed this beautiful pelican just after taking off from the water (see the falling water droplets?). What I wouldn’t give to glide through the air and see the world from above like this creature.

Yes, I’ve been lucky enough to work on beaches around the world, photographing underwater life, weddings, and other things I’d rather not lay claim to (pet photography, anyone?). But it was during a recent work trip to West Africa that I worked with an NGO to photograph water well installments and maintenance, and met people who had little access to water. This little boy made a lasting impression, and surely the joy of being able to splash water all around for the first time in his life was a special moment for me to capture on film.

My many thanks to Savannah Grace for nominating me to enter this contest in the first place! She’s a lovely and talented young lady who is also dedicated to co-hosting #travelpics (the travel photography chat on Twitter) with me each and every Monday.

To take part in the contest, I’m to nominate five other travel photobloggers. So…

– Alex Elliott, a talented photographer based in Scotland

– Poonam Parihar, a friend and photographer from India and New Jersey

Toward the end of 2014, I got a job offer to move to the U.S. Virgin Islands and work full-time as a destination wedding photographer. As someone who has always been mesmerized by green-aqua waters–and always wanted to live in the Caribbean for a few months–I didn’t have to hem or haw very much. How about not having to suffer through horrific Christmas music? How about missing snow in January and February? What about NOT being cold and miserable in New York? All right, I said. If you’re pulling my arm, I’ll do it for at least a few months.

As often happens, I had about one week to wrap things up in New York and move down to the oh-so-tropical St. Thomas. As usual too, some friends seemed excited for me and others put up a semi-hard shun. I spent Christmas scuba diving, and I was totally okay with that.

It’s the U.S., yet not. Things are run differently here. The food is terrible. Everything is uber-expensive since it all must be imported. The views are more beautiful than I could have imagined. I love [most aspects of] my job. Driving here is very stressful. Iguanas are the squirrels of the island. Nothing runs on time. You get the idea?

I have oh so many posts coming up but too little time to write them down–and so many visitors, which is awesome! As usual, in the meantime, here are a few li’l photos to carry you over. If you’re lucky enough, I’ll post a poem or something next time. 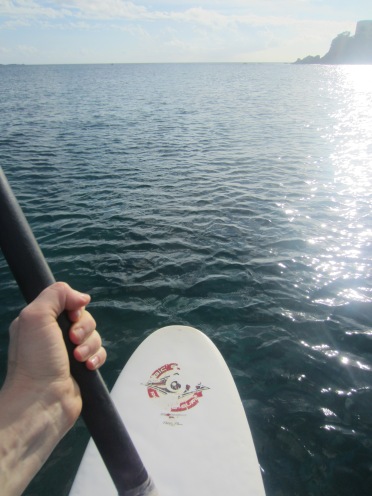